The Airports Commission has published a discussion document on how to deliver a new runway ‘expeditiously’. It mainly deals with whether to use the National Infrastructure planning process or whether to use a hybrid Bill (as with HS2). You may be interested to see the attached response from GACC. 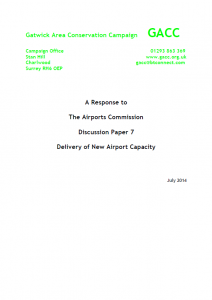 You may also like to see the following reports by RSPB and by WWF.

‘Aviation, climate change and sharing the load’ examines the economics of capacity expansion in the South East and the extent that other sectors of the economy would need to contract to allow aviation to expand. RSPB Aviation and Climate Change

‘The implications of a new South East runway on regional airport expansion’, demonstrates that if a new runway is built, commitments under the Climate Change Act cannot be met unless significant constraints are imposed on the level of activity at regional airports. It highlights that a new runway in the South East would exacerbate the North-South divide in two ways: directly, by sucking business away from the regions, and indirectly by taking up a very large percentage of the allowable CO2 emissions from UK aviation. WWF Regional Airports Report