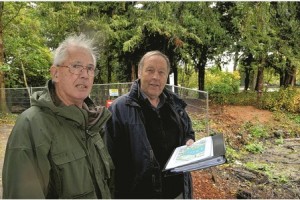 QUESTIONING: Residents Chris Truckle (left) and Adrian Knowles are concerned at the way the work is being carried out 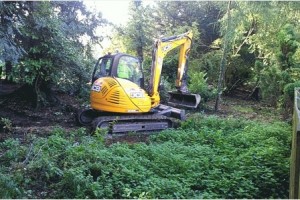 “UNNECESSARY”: Adrian Knowles took this picture of a JCB clearing shrubbery behind his house in Grattons Drive, which he says was not necessary

CONCERNED residents have raised issues with how work to restore Worth Park to its former glory could affect its history and wildlife.

Crawley Borough Council is in the process of spending 93.4 million on improving the Pound Hill park and Ridley’s Court opposite it.

Trees are being cleared from around Worth Park Lake and a contractor has been appointed to restore the lake and paths by repairing the dam, creating new planting around the edges and clearing overgrown shrubs, in an effort to restore the original Alpine character of the park.

However, nearby residents have expressed worry at the park’s character being lost. They say the extent of clearance and damage could spoil the beauty spot.

Adrian Knowles, of Grattons Drive, is unhappy at the damage caused to nature behind his house. He said: “I generally support the improvement works but I’m interested in maintaining the quality of environment.

“I have also been concerned to see the amount of damage created to the park at the various access points by tree felling vehicles.

Sensible
“Unnecessary trees and shrubs have been cleared behind my house, which I believe could have been saved if a sensible access route had been reached.”

Kevin and Sarah Hawkes, also of Grattons Drive, say the clearing of trees and shrubbery could impact on the wildlife living in the park.

Mr Hawkes said: “I have had my worries about how all the works around the lake could affect the wildlife. The trees are home to many birds nesting and other animals.

“This is a historic area. Some of our neighbours remember the park before houses were built here. It was all trees and people would fish at the lake all night.

“The park has long had leisure elements, with tennis courts well used, so I have no problem with new activities and changes. I just hope the park as a whole is preserved for future generations to enjoy”

To carry out all of the work the council pledged £975,000 and was granted £2.42 million by the Heritage Lottery Fund. This project has so far replaced missing Pulhamite stones in the Dutch garden and Italian terrace and the restoration of the fountain will soon be finished.

A council spokesman said residents feedback had been positive, adding: “With any project of this size, tree removal will temporarily create a less appealing landscape. We saw this at Tilgate Park before the dam works and we’re seeing it now at Worth Park.”