More than 1,400 cannabis plants worth around £1.2 million were seized by police when they raided 10 properties in Crawley as part of a major drugs swoop.

Seven people have been arrested and police say that Immigration Enforcement officials are currently investigating their status in the UK.

Four other people found at two of the Crawley addresses have been referred to specialist support services as potential victims of modern slavery, say police. 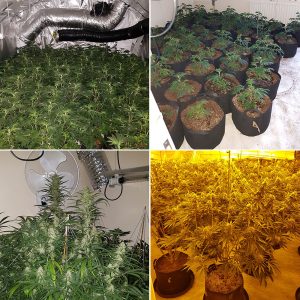 Officers say that two other men, aged 31 and 32, from east London, have been interviewed on suspicion of human trafficking offences.

Police say they carried out the first raid on February 2 after they were called to a report of intruders at an address in Tennyson Close, Pound Hill.

Officers say they found around 800 cannabis plants in various stages of cultivation, together with equipment used for their cultivation.

Two men, aged 38 and 35, were arrested on suspicion of production of cannabis and, after being interviewed, were released under investigation.

The spokesman added: “Two men both aged 21 were arrested on suspicion of cannabis cultivation and after being interviewed were released under investigation.”

A further 100 cannabis plants were found at an address in Lingfield Drive, Worth. “Two men aged 31 and 27, and a woman aged 35, were arrested on suspicion of cannabis cultivation and after being interviewed were released under investigation, ” said the police spokesman.

A number of people were questioned at an address in Woodfield Road, Northgate, but no arrests made. In a separate raid on a house in Dobson Road, Langley Green, police say they discovered around 20 mature cannabis plants.

A further 120 plants were found at three addresses, one in Alpha Road, West Green, and two in Forester Road, Southgate, say police.

Warrants were executed on Friday (February 14) at an address in Caburn Heights, Southgate, where 60 plants were discovered, and at an address in Gossops Drive where, say police, ‘a large number of plants was also found.’

Detective Inspector Cheryl Lewendon said: “We have completely disrupted a fully planned commercial project which appears to have been operating for several months, and was aimed at illegal drugs onto the Crawley and the surrounding area on a large scale.

“This is a large scale investigation in which we have had support from police and staff of our Crawley Prevention Enforcement Team, and also from colleagues across West Sussex as well as the force’s new Tactical Enforcement Unit.

“However our enquiries are continuing to trace other people we suspect of being involved in the organisation and management of these sites.

“Information from local people has already been key in exposing this project, and anyone with further information can contact us at any time either online or by calling 101, quoting Operation Forfar.