Gatwick Airport bosses say 20,000 new jobs would be created after revealing their final masterplan for development.

Airport bosses are now preparing a planning application to convert an existing emergency stand-by runway into full-time routine use. Bosses say the changes will mean a jobs boom and economic boost for the airport and surrounding area.

A spokesman said 8,000 jobs would be created at the airport and a further 12,000 jobs in the local region generating a £1 billion boost to the local economy.

The runway changes could mean passenger traffic increasing by up to 27 per cent by 2035. But those campaigning against the expansion plans said the local community had been disregarded. 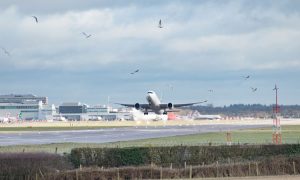 By Sarah Page and Ginny Sanderson

Major proposals for the expansion of Gatwick Airport have moved a step closer as officials revealed their final masterplan for development over the next 15 years.

Airport bosses are now preparing a planning application to convert an existing emergency stand-by runway into full-time routine use.

They also plan to use new technology to increase capacity on the current main runway and to safeguard land near the airport for a future possible runway – but stress they have no immediate plans for that.

Officials say it will mean a major boost to local jobs.

The runway, changes could mean passenger traffic increasing by up to 27 percent by 2035.

The airport currently deals with 55 take-off and landings an hour and, if the changes go ahead, will be able to handle up to 70 movements an hour.

Bosses say the changes will mean a jobs boom and economic boost for the airport and surrounding area.

A spokesman said: “We would create 8,000 jobs at the airport and a further 12,000 jobs in the local region He said it would also mean a £1 billion boost to the local economy.

A planning application is now being prepared for converting the airport’s emergency runway into full-time use, but officials say it will be used only for departures by smaller aircraft.

a development consent order is now being sought for the change which officials say, will include public consultation next year to allow local authorities, communites and businesses to have their say. 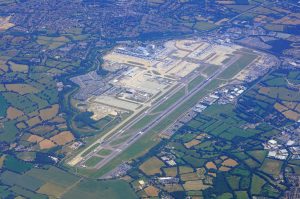 Meanwhile, safeguarding land at the airport for future possible use, say officials, has been the case since 2003. “The airport is no longer actively pursuing plans for an additional runway,” said the airport spokesman.

“Heathrow won that competition. But if – in the future – the land was ever needed, it would be a real shame if that land had been built on and homes or livelihoods had to be lost.”

Previously, opponents to Gatwick expansion have voiced fears that safeguarding the land could lead to three runways operating there.

However, revealing their final masterplan, officials say that two thirds of people who responded to a public consultation over the proposals were in favour of the expansion.

“We are grateful to the thousands of people that responded to our draft masterplan consultation and whose views will continue to help shape our plans.

“We are encouraged that public consultation has shown strong support for Gatwick and the local area’s ambitions.

“The plans would deliver additional capacity for Gatwick, which will provide choices for the future including incrementally growing our airport to meet demand and continuing to provide solid operational performance for passengers and airlines.

“This would be the biggest private investment for the region in the coming years, which would result in significant local economic benefits, including new jobs for the area.

“Gatwick’s global connections are needed more than ever but as we take our plans forward, we must do so in the most sustainable and responsible way and in full partnership with our local councils, communities, passengers and partners.”

The announcement has been criticised by campaign groups opposed to the expansion plans. 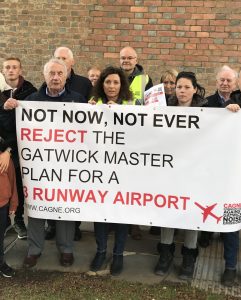 A statement from CAGNE (Campaign Against Gatwick Noise and Emissions) read:

“This is simply a second runway by stealth.

“To use the emergency runway alongside the main runway is in affect a second runway as it will have to be moved by some 12 metres to allow it to be used.

“As such it is a second runway without ‘the full parliamentary scrutiny or any funding for our roads or railway line that will see a huge increase in passenger and workers numbers migrating into Gatwick.

“This announcement by Gatwick management flies in the face of the government’s announcement for ‘net zero’ by 2050, which aviation is not currently included in.

“This clearly illustrates that Gatwick now be seen as truly the neighbour from hell for all the communities of Sussex, Surrey and Kent that already find aircraft noise unbearable.

“Gatwick management clearly ignore the current mood of the UK population, that of Sir David Attenborough and Prince Charles, that we have to act now to save our planet.

“Aviation is one of the most damaging issues our planet faces today and any saving of CO2 by modern planes will now be lost due to the desire for commercial gain by this airport owners as this plan is in addition to Heathrow expansion.

“It is totally disingenuous to the residents of Crawley to continue to safeguard the land for a 3rd runway when Crawley is desperate for land to meet affordable housing demands.”

Gatwick Area Conservation Campaign (GACC) says the plans show an “immediate disregard” to the local community neighbours. In a statement the group said:

“Gatwick Airport Ltd (GAL) has announced devastating expansion plans that will damage and blight the lives of residents surrounding the airport as well impacting on those further away living under flight paths.

“Despite claiming Gatwick is no longer pursuing an additional full runway GAL also wish to continue to blight residents living to the south of the airport with its demand to maintain the safeguarding land from any other development for anything up to 25 years.”

The statement said the plans to use the emergency runway as well as its main runway. will “substantially increase the noise and health impacts” on nearby residents – particularly those living north of the airport.

The group also said the proposal will have “severe effects” on a local infrastructure it says is “already overburdened” as a result of current growth.

GACC chairman Peter Barclay said: “In a world that is fast recognising aviation’s negative impact on health through noise impacts and air pollution, together with its contribution to climate change, GAL and the aviation industry ignore these impacts and blindly steamroller their unsustainable demands forward.”

Keep up to date with the latest news visit –