An impressive piece of public art representing the history and heritage of Worth Park has been unveiled. 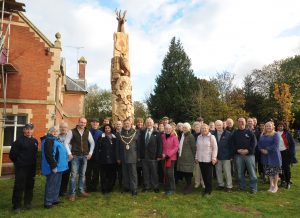 The ‘Timeline Totem’ was carved from a storm-damaged tree by West Sussex chainsaw sculptor Simon Groves in just seven days.

The different elements carved into the tree, which is situated in front of Ridley’s Court, represent various parts of the park’s history.

The stag highlights the area as part of Worth Forest, an ancient woodland and medieval deer park dating back to Anglo Saxon times.

The park became home to the Montefiore family from the early 1800s and is represented by the family crest.

Owls and books represent the private girls’ school, Milton Mount College from 1920 to 1960.