A petition calling for the removal of Crawley’s, pop-up cycle lanes has now been signed by more than 4,000 people. 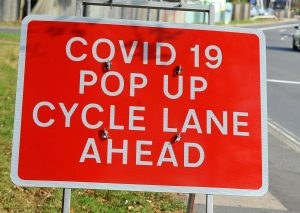 A sign warning motorist of pop-up cycle lanes in Crawley

Last week the Crawley Observer reported the petition was launched to remove Crawley’s two routes from Three Bridges to Manor Royal and Pound Hill to the town centre The temporary cycle lanes were set up by West Sussex County Council after receiving money from central Government to help support active travel as the country emerges from lockdown.

We asked our online readers if the pop-up lanes should stay or go.

Janice Wells said: “They should definitely go. This scheme has caused nothing but major congestion, confusion and in my opinion these areas are so much more dangerous for cars and cyclists alike! I hate driving out of Maidenbower now its just ridiculous planning at best….crazy !!!”

Austen Michael Thompson said: “I have been run off the road too many times even in cycle lanes because cars think that I shouldn’t be there, clearly they have not read the highway code completely :-)) “All in all, the cycle lanes are good but the cones are there so that people know the road is changing.”

Becky Beagley said: “There are miles of cycle lanes already in place in and around Crawley especially in the industrial area and cyclists still cycle on the road, next to the cycle lane!!! Can’t wait for the potholes when the posts are finally removed!!”

Alex Clifford said: “I cycle to work every day and I think they are the most stupid thing I’ve ever seen.”

Mick Holland said: “They should never have even popped up in the first place the highway code states that you can’t drive in the chevrons so you remove the chevrons to make way for a Covid 19 pop up cycle lane which no one is using all you have done is make it more dangerous for anyone using the road.”

Andrew Keith said: “They should be removed and replaced with a proper cycle network, and police who actually enforce the law and stop people cycling on footpaths illegally, and illegally using electric scooters.”

Danielle Kail said: “I think we should have all pedestrian paths shared with bikes too…I don’t think bikes should be considered safe on a road personally (I never feel safe: on a road when on a bike, and certainly wouldn’t with my two children). Either that or have much narrower but secure lanes for them, bikes don”t need a lane as wide as a car … I want to see more bike lanes/accessible spaces for bikes (at least all cycle paths joining up around Crawley … on the shared pathways),”

Tim Taylor said: “Let’s face it, they are there to appease the minority who have been the most Vocal. There’s no requirement for them.”

Lynne Sparshott, said: “Definitely go! An accident waiting to happen and an absolute nightmare, I’ve still yet to see a cyclist using it.”