Use of woods was ‘vandalism’
27th November 2019 – Crawley Observer

Furious councillors have criticised an ‘act of vandalism which saw a strip of Crawley woodland destroyed and the site used to park hundreds of cars.

Members of the borough council’s planning committee were told the site, off Crawley Avenue, was being operated by airport parking company Maple Manor to store cars for passengers using Gatwick. 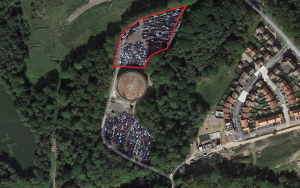 A report to the committee said 15 to 20 metres of woodland which stood next
to Gatwick Stream had been destroyed, hard-standing laid, and a 2.4-metre fence erected north of the former gas holder site.

The meeting was told the council only realised what had happened when an officer visited another unauthorised parking area to the south of the site.

A retrospective application to continue parking cars for five years was roundly criticised – and promptly dismissed – by the committee.

Ian Irvine (Lab, Broadfield) said: “It seems to me the actions that have taken place here are appalling.

“Even if [the trees] are replaced it could take years to get back to maturity. Is there any action which could be taken against the perpetrators of what I think is an act of vandalism?”

Jonathan Purdy (Con, Three Bridges) said: ‘We should be seeking enforcement for them to put the site back to the state it was before they damaged it.”

Members were told the idea was already there on the radar’.

An officer said the council was looking at enforcement action for the southern site and was ‘just awaiting the final details before we can look at the northern site’.

After the meeting, a council spokesman said: “The council has an ongoing
enforcement investigation into the unauthorised airport parking use and works undertaken in order to accommodate it.

“We are currently actively considering what enforcement action will be taken to stop the unauthorised use and the potential requirements needed to restore the land and comply with the Forge Wood neighbourhood planning permission as soon as possible.”

Maple Manor was not represented at the meeting.