Gatwick is due to unveil plans for a controversial second runway on Thursday.

The plan, which involves using the airport’s emergency runway for routine flights, could increase the airport’s capacity by more than 84,000 flights per year, at present, there is a legal agreement in place which prevents both runways from being used at once. However, the agreement is due to expire in August.

Gatwick’s plans for expansion suffered a major setback in October 2016, when the Government rejected the West Sussex airport’s plans for a second runway, in favour of a rival plan to expand Heathrow.

Although Gatwick’s new plan would need planning permission and Civil Aviation Authority approval, both of these could be obtained before the completion of Heathrow’s third runway – due in 2026.

A Gatwick representative said: “Airports are required to publish new master plans every five years, setting out their future growth plans and Gatwick has consistently confirmed it will do so before the end of this year. The draft plan will set out for our local communities, partners, airlines and stakeholders three possible growth scenarios, which we will then open up for views and feedback.

“In line with recent Government policy, Gatwick has previously set out it is exploring how to make best use of its existing runways, including the possibility of bringing its existing standby runway into routine use. This would deliver an incremental increase in capacity that complements the expansion schemes of other airports across the South East.

“Safety and security are always our key priorities and any new development would be fully compliant with all international safety requirements.”

Fun for the whole family!

Children, parents and grandparents all welcome

no need to book, just turn up on the day! 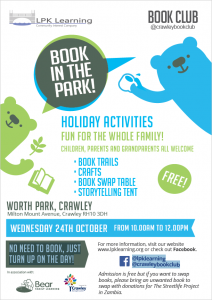