Refreshments will be provided
Showcases from attendees including:

Stay for the Crawley County Local Committee after this event at 7pm where items include: 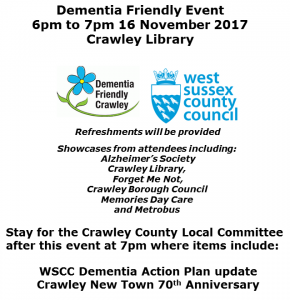 County Local Committees consider a range of issues concerning the local area, and where relevant make decisions. It is a meeting in public and has a regular ‘talk with us’ item where the public can ask questions of their local elected representatives 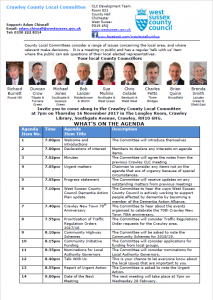 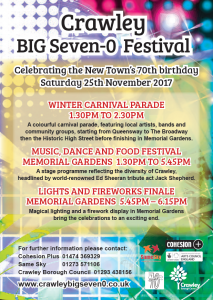 Winter Carnival Parade
1.30pm to 2.30pm
a colourful carnival parade, featuring local artists, bands and
community groups, starting from queensway to the broadway
then the historic high street before finishing in memorial gardens.

lights and fireworks finale
memorial gardens 5.45pm to 6.15pm
magical lighting and a firework display in memorial gardens
bring the celebrations to an exciting end. 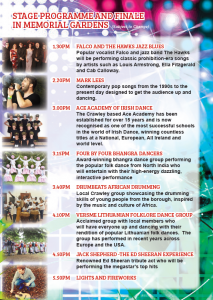 This message forwarded on behalf of Thuso Selelo in regards to the Traveller Site Proposal at Lower Hollow Copse, Copthorne

The Corporate Estates and Facilities Business Unit, Mid Sussex District Council, along with the current site owner, intend to re-submit the planning application for public and private gypsy and traveller accommodation (GTA) at land at Lower Hollow Copse, Copthorne.

We are therefore holding a public consultation and exhibition (flyer below) on Tuesday 7th November 2017 and invite you to meet with the technical and design teams on the day. 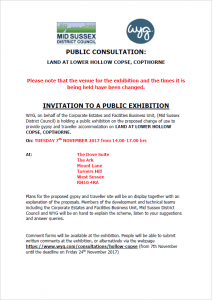 I look forward to you hearing from you in due course. 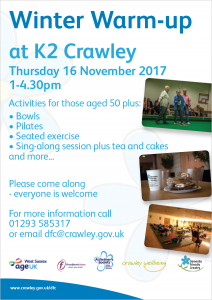 and more…
Please come along
– everyone is welcome 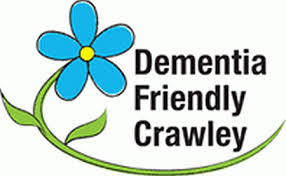 The announcement today [October 25th] that Gatwick will seek expansion with or without Heathrow expansion is not a surprise to CAGNE, Communities Against Gatwick Noise and Emissions.

Reasons why Gatwick cant be permitted to expand:

The Gatwick Brexit effect
Talk of tax on European flights, airlines moving to Europe, Gatwick is still reliant upon European business. A debate will be heard on the subject ofBrexit and aviation on 30th October.

On average 89% of Gatwick’s flights are to European destinations, growth is questionable outside of Europe as it is dependent upon leisure travel, those that are badly impacted by recessions and the value of the pound dropping against the Euro. Gatwick boasts of Norwegian Airlines growth but Moody, for 2017 has downgraded them, so where is Gatwick’s growth coming from

Did you know that the Civil Aviation Authority say 58% More Brits fly out of than foreigners fly in. [i] So that’s £ out of the UK not into the UK purse!

Impact on regional growth
Flying from a local airport, working close to your job reduces carbon emissions and so enables local prosperity and reduces the impact on climate change.

Southampton, Bournemouth airport, to name just two, could be badly impacted by Gatwick growth as airlines are enticed by low landing fees, resulting in a decline of regional airports forcing workers onto the roads to find jobs at other airports, so how does this help emissions, road congestion and climate change?

If Heathrow build a new runway and so does Gatwick what will happen to the northern powerhouse if climate change targets have to be reduced?

“surface access is not their problem” says Gatwick, but it is for the communities, far and wide as well as local authorities lack of budgets as do the Government.

Whilst this is almost entirely due to road traffic it is very similar to the situation around Heathrow but without any alternative to take the cars/freight from the roads – and this is now – so it would seem deterioration of air quality is highly likely for taxpayers around Gatwick Airport so sound reasoning says it cant be allowed to grow.