A message from Brendon Sewill of GACC

It now looks as if the runway decision will be announced in the Parliamentary session starting 10 October, not in September.

You may be interested to see our latest research study, on Flight Paths with a Second Runway by Charles Lloyd, see below. 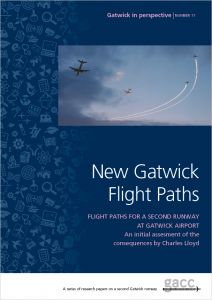 A similar study has recently been produced by CAGNE. The two reports, written in different styles, are designed for different audiences and reinforce each other.

Our other research studies, designed to influence the debate in Whitehall and Westminster, are at www.gacc.org.uk/research-studies 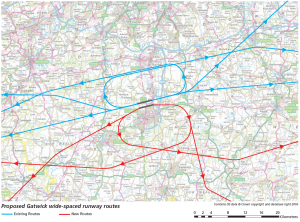 You now have a last chance to influence the runway decision. Please write a letter to a national newspaper. For the best chance of publication your letter should not be longer than 3 sentences and should be a comment on a report in the paper.

Thank you for your support. 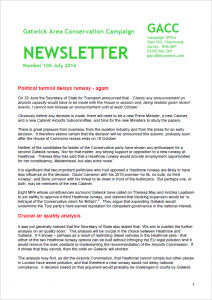 An expansion at Gatwick Airport would deliver up to 28,000 new jobs, says a new report.

The report, compiled by Amp, examined the current range of jobs at Gatwick and assessed the types of jobs and skills needed for – the airport to grow, as part of its current investment plans and possible second runway.

Findings showed that a second runway at the airport would boost employment across the region and create huge opportunities for young people and skilled workers directly supporting 28,000 new jobs.

It is estimated that expansion would stimulate 12,000 new jobs across the UK to accompany the 21,000 jobs Gatwick already directly supports and. the further 10,000 it indirectly supports.

Gatwick CEO Stewart Wingate said: “Gatwick’s second runway will not only connect the UK to existing and emergent markets around the world, it will also provide thousands of jobs across the South East and deliver a once in a generation opportunity for young people to directly benefit from expansion.

“Gatwick can deliver a new runway faster and have a spade in the ground before 2020 which means, after decades of delay, Britain can finally benefit from airport expansion.”

The report also found that Gatwick provided an opportunity for employment for all as employees fell across the full range of skills and qualification levels.

further expansion would deliver job opportunities across the full range of job types. However, pressure group CAGNE (Campaign Against Gatwick Noise Emissions) said in a statement “Such
an influx of labour and their families would bring local housing, schools and doctors’ surgeries to their knees.”

The group said the areas surrounding Gatwick have virtually no unemployment and this view was supportd by publicly available data and was recognised by the Airports Commission, which said: ‘there is very little unemployment in the Gatwick area’.

The CAGNE statement said: *the consequences of such an influx would be catastrophic to local people. Ask anyone who lives-locally about the inadequacies they and their children suffer today – insufficient housing, school places, clinics and doctors. Plus, right now, they put up with one of the country’s worst motorways and an appalling railway service”.

CAGNE added, “Furthermore, the promises of jobs and raining issued by privately owned Gatwick are distractions from the real issues that will hit local residents.” 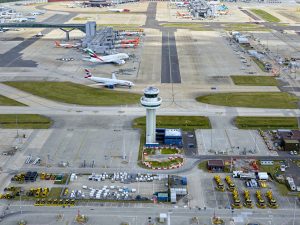 Gatwick has achieved its busiest single month in its 80 year history. To celebrate this landmark in the airports history Gatwick has released a collection of new aerial imagery from acclaimed New York photographer Jeffrey Milstein, providing a brand new aerial perspective on Gatwick. One of the photos is reproduced here.