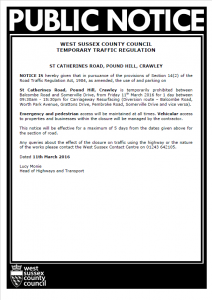 NOTICE IS hereby given that in pursuance of the provisions of Section 14(2) of the Road Traffic Regulation Act, 1984, as amended, the use of and parking on

Emergency and pedestrian access will be maintained at all times. Vehicular access to properties and businesses within the closure will be managed by the contractor.

This notice will be effective for a maximum of 5 days from the dates given above for the section of road.

Have your say! …about the improvements at Crawley Hospital

Through this event we are seeking public suggestions that would influence the final choice of: the colour schemes, soft furnishing, overall interior design of following areas at the Crawley Hospital – Urgent Treatment Centre:

Children’s area (Morning session 10am or 11am) 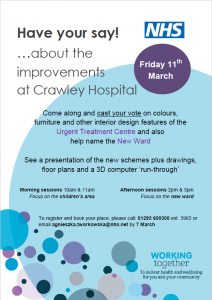 As we have only limited amount of spaces available, I would be delighted to hear from you as soon as possible! 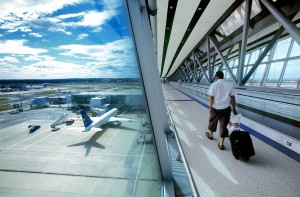 Gatwick Airport Chief executive Stewart Wingate has urged the Government to “peel beyond the executive summary” of the Davis Commission report, which recommends the building of a third runway at Heathrow.

The boss of Gatwick Airport says he expects ministers will re-examine forecasts for passenger growth which were “nearly 10 years out’ as they conduct further investigation into proposals to expand airport capacity.

Chief executive Stewart Wingate urged them to “peel beyond the executive summary” of the Davies Commission report, which recommend the building of a third runway at Heathrow in July last year.

He said: “It’s absolutely fascinating because when you look at the conclusions that were drawn it doesn’t seem to be consistent with the information that was within the report.”

Mr Wingate claims economic impact analysis, which favoured expansion at Heathrow over Gatwick, was based on “spurious biased forecasts” which did not appear elsewhere in the study.

In December ministers postponed a final decision on which project to back and a final decision is not expected before the summer as Transport Secretary Patrick Mcloughlin said fresh analysis of the environmental effects was required.

Mr Wingate said the impact on air quality of a third runway at Heathrow means that project would be “very open to legal challenge” if it is selected, but he also expressed his hope that estimated passenger figures would be looked at again.

‘We’re expecting they’ll want to do work looking at the traffic forecasts,” he said. “The Davies Commission work was based on a set of traffic forecasts that saw Gatwick get to 40 million passengers in 2024. We repeatedly said to the Commission’We’re there already, your forecasts are nearly 10 years out’.

“I’m pretty sure the Government is going to want to take a look at that.” Gatwick recorded 40 million passengers in a 12-month period for the first time in October last year.

Mr Wingate accused Heathrow of attempting to “paint a picture” that it could provide “significantly more” long-haul connections than Gatwick. An expansion forecast published by the Davies Commission suggested that by 2050 Heathrow would serve 133 long haul routes compared with 131 at Gatwick.

It really doesn’t matter if you expand Heathrow or Gatwick, the UK will massively benefit from a connections point of view,” Mr Wingate said. “You get the same connections but the price of ours is £7.8 billion versus £18.5 billion at Heathrow.

“What on Earth as a country would lead you to invest unnecessarily £11 billion more on infrastructure which passengers have to pay for?”

The Commission said in November 2014 that a second runway at Gatwick will cost £9.3 billion, but the airport insists this figure includes a contingency fund for unexpected costs which is already part of its own £7.8 billion estimate.

Mr Wingate expressed his hope that the Government will examine the work done by the Davies Commission and then carry out “a more thorough job and a fair job” He added: “If they do that… then the Government will be in a position to say Actually the right solution for the UK is Gatwick?

Heathrow chief executive John Holland-Kaye claimed that backing expansion at his airport was the only way ministers can deliver sustainable economic growth and cut the deficit. He also hit out at Gatwick’s plan, saying it did nothing for the economy or job creation and lacked political support.

An image showing how the expanded Gatwick Airport would look

The Government has denied “dithering” over the long’ awaited decision on airport expansion in the South East.

Transport minister Lord Ahmad of Wimbledon insisted at question time that it was important for ministers to consider environmental issues like air pollution before making a decision.

But Labour’s Lord Harris of Haringey said the Airports Commission had been set up by the previous coalition Government “as a means of keeping this Particular ball in the air because the government was not prepared to make a decision”.

He told peers: “The ball has now been kicked firmly into the long grass and every so often the Transport Secretary kicks it further away from a decision.

“If the Government really believe that this is an urgent and important decision to increase airport capacity, how much longer is it going to dither over this issue because they do not want to make a political decision?”

Lord Ahmad said the Government had been clear that it needs further time to consider environmental issues such as air pollution.

“This is not about keeping things up in the air. On the contrary, it is about getting those things in the air down on the ground,” he added.

Lord Ahmad said the Government announced in December that it accepted the commission’s case for new runway capacity in the South East, as well as the three shortlisted schemes involving Gatwick or Heathrow.

Challenged by Peers to consider other regional airports like Birmingham, he laid the Government would not be looking at any other options.

Tory former Cabinet minister and ex-pilot Lord Tebbit said major international airlines could not be compelled to fly into airports they did not wish to go to.