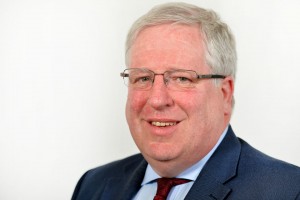 A final decision on a new runway for the South East of England could be further delayed by the referendum on Britain’s membership of the EU, Transport Secretary Patrick Mcloughlin has hinted.

Mr Mcloughlin said he hoped the Government would finally make its choice between expansion at Heathrow or Gatwick by the summer, but added that the referendum was one of a number of issues competing for ministers’ attention in the months ahead.

Speaking to LBC radio, the Transport Secretary denied that last year’s postponement of the runway decision was designed to delay the contentious verdict until after the election of the new London mayor in May.

Asked when the issue would finally be resolved, Mr Mcloughlin said: “I hope later this year. We have said we would hope to move some way by the summer of this year.” But he added: “There’s lots of other things which are going on in the political spectrum – if there’s a referendum this summer, and the like.

“But I would hope by the summer of this year we will be able to make progress.” A decision on a possible third runway at Heathrow was deferred last month after ministers decided more work was needed on its impact on air quality, noise and carbon emissions.

Mr Mcloughlin insisted that the upcoming mayoral election “didn’t have any bearing” on the decision, pointing out that ministers had known of Conservative candidate Zac Goldsmith’s opposition to a third runway for some time. 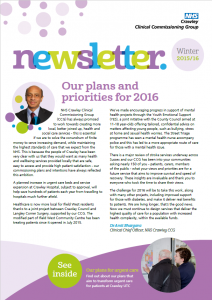 You can even join the conversation and share your thoughts and experiences of local care and services direct with us.

Would you like to learn more about how to identify birds? Would you like to help the RSPB with bird conservation? Why not come and join us for an hour in beautiful Worth Park on Sunday 31st January and help us to record all the birds that live there.

Birds spotted recently include three cormorants, kingfishers, tree creepers and a heron. Your results will go on a national database.

The event is free – no need to book.

Everyone welcome, we hope to see you there! 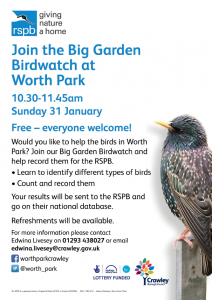 The county council’s leader has been challenged on her ‘obligation’ to promote the authority’s policy of opposition to a second runway at Gatwick.

West Sussex County Council voted by a majority of 37 to 26 to oppose expansion at the airport in January 2015, but campaigners have criticised Louise Goldsmith for a lack of public response over both revisions to flight paths and the ‘increased threat’ of another runway at Gatwick.

But Mrs Goldsmith said they ere planning for whatever decision was made by the Government on a new runway at either Heathrow or Gatwick and the council was aware of concerns expressed by residents.

In its letter to Mrs Goldsmith, Communities Against Gatwick Noise and Emissions (CAGNE) said that following WSCC’s decision on a second runway Mrs Goldsmith was ‘obliged to actively to actively promote and further at all times’ the policy.

Sally Pavey, chair of CAGNE, said: “Your lack of action in the public domain, or even replying to the issues residents are raising now concerning concentrated flight paths and the returned threat of a second runway is noticeable.”

The letter also said the group was aware that Mrs Goldsmith’s personal view was that Gatwick should be expanded, and felt that her membership of the Gatwick Diamond Initiative, as a representative of the county council, was an’apparent conflict of interest’.

But Mrs Goldsmith said county councillors were well aware of concerns that residents have raised about the potential implications of another runway at Gatwick and what it might mean for West Sussex, and these had formed a key part of their debate last year.

She said: “The decision whether to have a second runway at Gatwick Airport is not West Sussex County Council’s to make. It is out of our hands. Even so, we are planning now for whatever the decision is.

“The county council, in line with its strategic role and responsibilities, is working with others on potential future infrastructure needs. The work considers the potential impact of a second runway.

“If there is a second runway at Gatwick Airport, we need to consider how best to mitigate the effects on local communities and the environment. This includes the effects on air quality and how that might affect people.

“We have to consider how to provide the infrastructure and services needed for more jobs, housing, business opportunities, homes, traffic and transport.

Following the recent successful Open Day event that took place on Friday the 11th December, I would like to encourage all to visit our website where you can participate in our virtual tour, giving you an opportunity to see the proposed new design for the Crawley Urgent Treatment Centre. (UTC).

Please also see below our Information Pack through which we hope to address some of the Frequently Asked Questions relating to the UTC. 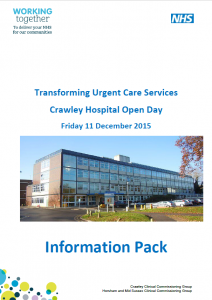 The plans, subject to final approval, include refurbishment of the Urgent Treatment Centre, an extended Clinical Assessment Unit, an expanded area for treating children and a larger reception area to ensure the best possible experience for local patients. As you may be aware this redevelopment is a response to patient engagement, bringing more services into Crawley under one roof, and ensuring more services are available closer to home.

On this note I would like to inform you that further opportunities for engagement will be promoted over the upcoming period. Your involvement would help us to ensure user-friendly colour schemes, flooring and facilities that still need to be chosen.

NHSCrawleyCCG where you can see pictures from the event. We will soon be uploading pictures showing the new design of the Crawley UTC and the new Ward at Crawley Hospital. 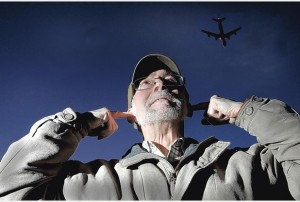 Making a Noise: People living close to Gatwick Airport can now monitor the amount of noise where they live

Gatwick Airport has launched an online tool so residents can monitor the amount of aircraft noise where they live.

Gatwick’s “noise lab” is a website providing up-to-date information about the number of flights heading over people’s homes.

This interactive map has been modelled on a similar tool introduced by Schiphol Airport, in Amsterdam – the first of its kind in the world.

It uses live data from a network of on-the-ground noise monitors. The aim is to give residents a clearer picture of flightpath trends and will lead to the development of longer-term noise mitigation measures.

“This lab is just one of a number of measures we’re introducing, to better understand people’s concerns.”

Other UK airports have introduced flight trackers but these have a 24-hour delay and do not provide as detailed information on aircraft movements.

The measures Gatwick is pursuing to reduce aircraft noise include offering airlines an incentive to use quieter planes by charging them less.

The airport is also employing a continuous descent approach, so aircraft use less thrust by gliding and descending at a continuous rate – generating less noise.

Last year Gatwick spent £2.35 million on a noise insulation scheme with 730 households signing up to receive £3,600 worth of insulation.

The noise lab can be viewed online at

Do you think this is a good idea? E-mail your views to

Gatwick Airport has launched an on-line tool which provides information on aircraft noise. 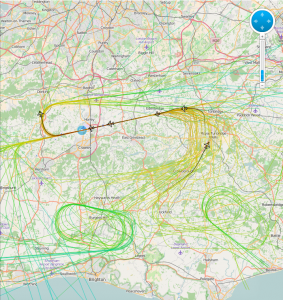 A spokesman said the community noise lab’ was the first to be developed in the UK’ Tom Denton, Gatwick’s head of corporate responsibility, said: “This noise lab provides up-to-date flight tracking information which will help us to more accurately monitor concerns and, in time, consider options for further noise mitigation measures.

This lab is just one of a number of measures we’re introducing, to better understand people’s concerns.’ A spokesman for the airport said the new tool was developed with input from local council environmental health officers and GATCOM (Gatwick’s Consultative Committee).

Unlike other airports’ flight trackers, Gatwick’s website provided more detail and did not have a 24 hour delay. It used live data from a network of on-the-ground noise monitors to produce community noise reports.

The spokesman added Gatwick was pursuing measures to reduce aircraft noise including: incentivising airlines by charging them less to use quieter aircraft -‘almost all (99 per cent) of the aircraft currently using Gatwick are among the quietest types in operation, and employing a continuous descent approach, so aircraft use less thrust by gliding and descending at a continuous rate – generating significantly less noise’.

The’noise lab’ was developed by Casper, an IT company specialising in the development of real-time location-based monitoring and analysis tools and can be viewed here: 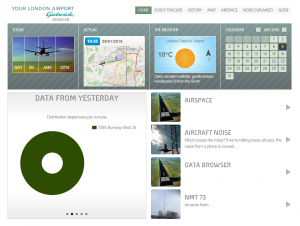 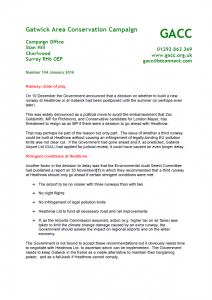 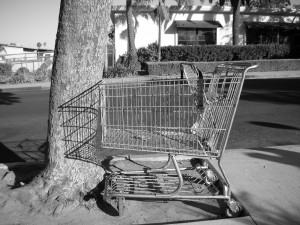 The following information – taken from Crawley Borough Council’s webpage outlines the best and quickest way to get shopping trolleys removed.

Trolleywise are a professional trolley retrieval service who have been appointed to pick up trolleys in Crawley on behalf of: Tesco, Asda, Sainsburys

You could also download the free Trolleywise App this is available for iphone or Android devices.

This app enables people to report an abandoned supermarket trolley cluttering up a street or road by taking a photo and then GPS signal will give its exact location.

Please be careful out there – photographs of abandoned trolleys should only be taken if it is safe and legal to do so.

If an abandoned trolley is not from Tesco, Asda or Sainsbury’s please report it to the store directly:

This link is useful for reporting problems:

This is the quickest way to get a problem reported and is likely to get resolved fastest too – simply because it will end up with the correct person, ready to deal with the issue straight-away.