How the proposed second runway at Gatwick Airport would look

A decision on airport expansion at either Heathrow or Gatwick might not be made until before 2020, Crawleys council leader has suggested.

The Government was expected to announce whether or not it would accept the Airports Commission’s recommendation in favour of a third runway at Heathrow over a second runway at Gatwick before the end of the year.

But the Government has delayed a decision until summer. Gatwick Airport chief executive Stewart Wingate described it as the ‘defining moment in the expansion debate’, but anti-second runway campaigners said it created a ‘minefield of uncertainty’.

At a Crawley Borough Council meeting on Wednesday (December 16), leader Peter Lamb said he would put money on a decision being delayed until after 2020, the likely year of the next general election, because of how politically difficult the issue was.

He said: “I would not expect a decision between now and 2020.” it was asked what the council was doing to highlight its opposition to a second runway as Gatwick Airport continued to lobby for expansion.

The council has voted to oppose a second runway, but Mr Lamb suggested there were better things to use council resources on rather than constantly writing to the Government.

Mr Lamb (Lab, Northgate) added: “I can tell you the Government is not going to care what the council thinks. It does not affect what they think it’s a national policy issue.”

But Bill Ward (Lab, West Green) said: “It’s a crucial time to take an interest and defend the council’s position, which is against a second runway. The debate is getting incredibly strong.”

GATWICK’S chief executive has called the Government’s delay in making a decision on whether Gatwick or Heathrow will expand a “defining moment” and believes momentum is building for a second runway at his airport.

The Government confirmed last week that a further review of the environmental impacts of either Gatwick or Heathrow being awarded a new runway must take place before a final decision can be made. This is now not expected until the summer of 2016 at the earliest.

Gatwick’s CEO Stewart Wingate has argued the call for further environmental studies shows a third runway at Heathrow is unviable Mr Wingate said: “This is a defining moment in the expansion debate. “There is now a clear choice facing Britain, growth with Gatwick, or inertia at Heathrow with an illegal scheme that has failed time and time again.

“Expansion at Gatwick would give the country the economic benefit it needs at a dramatically lower environmental cost. ‘Air quality, for example, is a public health priority and obviously the legal safeguards around it cannot be wished away “Even Heathrow’s most vocal supporters must now realise a third runway at Heathrow will never take off as the environmental hurdles are just too high.

“If they want Britain to have the benefits of expansion and competition they should now look to Gatwick. “Expansion has been in a holding pattern for decades. Momentum is now behind Gatwick as it becomes ever clearer that it is the obvious solution.”

Business leaders in the area are also backing Gatwick’s campaign. Tim Wates, chairman of business support group Coast to Capital, recently wrote to the Prime Minister urging him to opt for a second runway at Gatwick.

“For Crawley it would bring unacceptable urbanisation, road congestion and air pollution from a massive increase in road usage. “If Gatwick gets a second runway, the result would be urban sprawl joining up the towns of Horsham, Crawley and East Grinstead.” 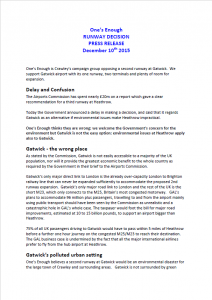 Again if you haven’t seen the excellent brochures that GACC and the Aviation Environment Federation have sent to all MP’s, setting out why the Gatwick option will eventually be rejected, here are the web links.

Very many thanks
One’s Enough

Opponents of plans to expand Gatwick Airport said this week they are’not surprised’ that a decision on the future of the airport has been postponed until next summer.

Gatwick Airport Conservation Campaign members say that there is no easy option on expansion and that both Gatwick and Heathrow face substantial environmental problems for which no solution has yet been found.

The Government says the delay would allow a choice to be made between rival schemes at both airports. GACC members maintain that expanding Gatwick would aggravate the north-south divide; that 50,000 people would be affected by worse air quality; that expansion would mean the need for a new town the size of Crawley; that three times as many people as now would be affected by severe noise and road and rail systems would not cope when the airport reached full capacity”

GACC chairman Brendon Sewill said: “One issue the Government will need to examine during the next six months is the real cost of the road and rail infrastructure work required for a second Gatwick runway.”

The group says its research shows that if Gatwick were operating with two runways at full capacity the M23 and M25 would need major widening, the M23 would need to be extended into London, several new A roads would need to be built east and west of Gatwick, and the Brighton main rail line would need extensive work. Brendon Sewill added: “The Government is right not to be rushed into a hasty decision.”

A statement from One’s Enough, Crawley’s campaign group opposing a second runway at Gatwick, said: “seventy five per cent of all UK passengers driving to Gatwick would have to pass within 5 miles of Heathrow before a further one hour journey on the congested M25/M23 to reach their destination.

The Gatwick business case is undermined by the fact that all the major international airlines prefer to fly from the hub airport at Heathrow.”

But Gatwick officials say they are glad that the Government now recognises that more work needs to be done before a decision is made over the expansion of Gatwick or Heathrow.

Gatwick Airport CEO Stewart Wingate said: “There is now a clear choice facing Britain: growth with Gatwick or inertia at Heathrow with an illegal scheme that has failed time and time again.

“We have always maintained that this decision is about balancing the economy and the environment. Expansion at Gatwick would give the country the economic benefit it needs at a dramatically lower environmental cost.

“We are glad that the Government recognises that more work on environmental impact needs to be done. Air quality, for example, is a public health priority and obviously the legal safeguards around it cannot be wished away.” 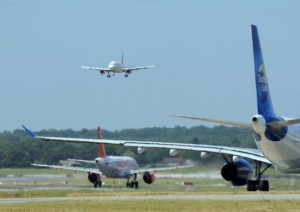 The announcement that a decision on Gatwick Airport expansion has been delayed was met with frustration by campaigners.

The Campaign to Protect Rural England (CPRE) says that by postponing the decision until late next year, the Government has left communities in limbo. “We are disappointed that they keep delaying such an important announcement,” said CPRE Sussex director Kia Trainor.

“The focus should not be on whether Heathrow can meet air quality targets, but the fact that expanding either Heathrow or Gatwick will cause significant and unacceptable levels of air pollution.

“With the delayed decision we are still left in a minefield of uncertainty and this will affect local decisions which are being made right now, such as housing targets in local plans and investment in infrastructure.

Campaigners say a new runway at Gatwick would breach climate change targets and have pledged to continue to fight the lingering threat of expansion with a campaign of common sense.

Brendon Sewill, chairman of Gatwick Area Conservation Campaign (GACC) said that GACC was not surprised by the delay.

“There are huge environmental problems at Gatwick as well as at Heathrow,” he said. “Gatwick does not’ provide an easy answer.

“Three times as many people as at present, many of them in Crawley and Horsham, would be affected by serious aircraft noise.

Money put before the environment

“Over 50,000 people would, according to the Airports Commission, suffer worse air quality as a result of a second Gatwick runway.

“The road and rail system around Gatwick just could not cope with an airport eventually larger than Heathrow today.

“The government decision to delay will do no harm as there is plenty of unused runway capacity at both Stansted and Luton; indeed GACC believes that the need for new runway has been exaggerated by Gatwick airport for their own commercial reasons.”

Sally Pavey, chair of Communities against Gatwick Noise and Emissions (CAGNE), said:’Gatwick does not link up to any parts of the UK and we just have to keep reiterating that time and time again.”