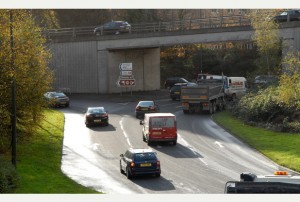 Fears have been raised that Crawley residents’ health is being compromised by the poor air quality in areas of the town.

Parts of the town close to Crawley Avenue and the Hazelwick roundabout have been found to have higher levels of nitrogen dioxide in the air than the national average.

High levels of nitrogen dioxide, often caused by traffic, can cause breathing problems, particularly for anyone suffering from asthma or bronchitis.

But as yet Crawley Borough Council has not revealed how far above the national average the nitrogen dioxide levels in these areas are.

The council must declare the parts of Crawley with poor air quality as an air quality management area (AQMA) and make an action plan for tackling the problem. A proposed AQMA has been drawn up.

Before finalising its plan, the council is running a consultation and wants to hear the views of residents and businesses in and around the proposed AQMA.

It specifically wants to know if people living just outside the AQMA think it should be made bigger to include their roads.

Pound Hill resident Derek Meakings lives “within 50 yards” of the proposed area and thinks it should be widened to cover all of the main roads in the town, so the council has to work to improve air quality across Crawley.

Mr Meakings, who is retired, is concerned about the effect that pollution, caused by growing amounts of traffic in the town, will have on residents’ health.

He said: “Doctors will tell you across Crawley that it’s got a very, very high incidence of respiratory problems, because we are obviously in the Gatwick basin and have the airport and lots of traffic. There’s a high number of asthma and respiratory related problems now, because of the poor air.”

An application to build a two-storey building in Harewood Close, Three Bridges, was refused last month, partly because the site was within the AQMA.

Roads covered by the AQMA include Hazelwick Avenue and North Road, in Three Bridges; Oriel Close and St Annes Road, in Pound Hill; and Tushmore Lane and Woodfield Road, in Northgate.

In refusing the Harewood Close application, a council officer said: “The proposal would result in future occupiers being exposed to these (above average) levels (of nitrogen dioxide), to the detriment of public health.”

The council has not commented on how the health of people already living in the AQMA is being affected by such levels of nitrogen dioxide.

Peter Smith, Crawley Borough Council’s cabinet member for planning and economic development, says he has asked this question of officers.

Councillor Smith, a keen cyclist, added that the fact that the council is having to declare an AQMA is not good news for Crawley.

He said: “I think it’s very bad news for Crawley that we now have an area that has bad air quality. I have asked questions of officers because I am interested in the subject.

“The worrying thing about it is we have to define the problem, but the cause of it is the traffic and there’s nothing we can do about the traffic.

“We may be able to influence buses – things like putting converters on their engines to make them greener.

“It’s another argument for getting people out of cars and onto buses, trains and bikes.”

The Crawley News asked Crawley Borough Council how it intends to improve air quality in the AQMA, but a response had not been received as we went to press.

The deadline for comments on the AQMA consultation is March 13. For more information, including a list of affected streets, visit 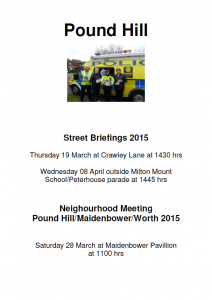 Please review the following information in the comments and diagram. 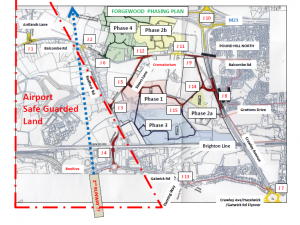 Junction 8 is the closest and potentially the most devastating to Pound Hill North, especially the closes between Grattons and Crawley Avenue. This junction will be a 5 way configuration of traffic lights. These lights are right next to St Annes and the apartments at bottom of St Catherines, very close to St Hilda’s and Oriel.

Most vehicles on Crawley Avenue will be likely to be stopped at these lights with the ensuing pollution coming from cars standing still then accelerating away resuming their journey.

Junction 9 changes how we access and exit Crawley Avenue from the Balcombe Rd with Junction 14 adding addition lights along the way to Junction 8.

You may also wish to consider the proposed changes at Three Bridges Station which will affect everyone on our alternate route into/from town.

There is also an ongoing activity to monitor air quality along Crawley Avenue (see Air Quality Management Area) it will be interesting to see how we are able to improve air quality with the introduction of so many additional traffic lights.

Hello everyone, we have just become aware of a new CBC Consultation on air quality. There does not appear to have been any publicity or widespread notification of this process which is now two weeks into a 4 week consultation period.

This Consultation is focussed on the Crawley Ave/Gatwick Rd/Hazelwick Ave roundabout and flyover area (see attached map). Although the focus is on Crawley Avenue the map shows how other roads over a wider area are affected. This is referred to as an Air Quality Management Area (AQMA).

The Council is now legally required to identify this AQMA zone, which underlines the grave concerns about the potential high level of pollution across the town should a 2nd runway be developed at Gatwick.

This also raises the question of why the proposed AQMA stops where it does when the levels of road traffic must be similar on adjoining/continuing roads.

As an example, the Hazelwick Ave zone finishes near to Three Bridges Station and Haslett Ave which would appear to just as busy roads. Also the Crawley Ave zone finishes before the Tushmore Roundabout!! From the map you can see many more questions to be raised.

It also raises the question of the need for monitoring of pollution levels on other roads such as Ifield and Southgate Avenues, the A264 through Broadfield and Bewbush, the whole of the Crawley Avenue from County Oak to Pease Pottage, along the M23 from the airport right round past Forgewood, Wakehams Green, Worth and Maidenbower, etc. etc.

There has been references to the nitrogen levels on the A4 by Heathrow are still exceeding the permitted level and that Heathrow may not be able to be expanded because of this. Anything we can do to show air around Gatwick is also an issue might add weight to the argument against Gatwick expansion. 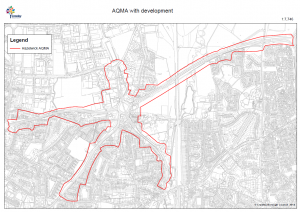 The size and extent of this area is now open for public consultation until the 13th March.

Area covered by the AQMA
The AQMA includes roads and properties captured within the red boundary line shown on the plan including: –

If you can, please respond to this Consultation before 13th March and let your neighbours and friends know about it, and if possible also write to the press with your views.

Ones Enough – Crawley’s campaign against a second Gatwick runway led by a cross party group of local councillors, supporting a One Runway, Two Terminal Airport with Spare Capacity

Your support and donations are critical to the undertaking and success of this campaign, Contact us at

www.facebook.com/gatwickonesenough
to support the campaign and offer help.

Donations may be made by sending a cheque payable to “One’s Enough” to One’s Enough c/o 23, Fitchet Close, Crawley, RH11 7PY. Cash donations may also be made at the next meeting.