Residents get behind expansion of Gatwick
24th September 2014 – Crawley News

Gatwick bosses have claimed that Crawley residents are “among the most supportive” of a second runway there, following a YouGov poll of residents in areas surrounding the airport.

The polling covered seven areas – Crawley, Croydon, Mid Sussex, Horsham, Mole Valley, Tandridge, and Reigate and Banstead – with the average level of support at 52 per cent in favour of expansion at Gatwick and 36 per cent opting for Heathrow.

A spokesman for Gatwick said that 54 per cent of Crawley residents were in a favour of expansion, with “only residents of Croydon (58 per cent) and Horsham (57 per cent)” more supportive.

He added that more than half (53 per cent) of Crawley residents said the advantages of expanding Gatwick outweighed the disadvantages for the local area, compared to 37 per cent who disagreed.

And the spokesman said clearly three times as many Crawley residents (65 per cent) also thought that expanding Gatwick was important for the local economy, with 28 per cent disagreeing.

But only 101 people were questioned in Crawley as part of the poll, with a total of 1,009 residents from the seven areas having taken part.

Do you think a second runway at Gatwick is a good thing for the future of Crawley? E-mail your views to

Bulb planting 30 October
Could you spare a couple of hours to help plant bulbs and bring a splash of colour to Worth Park in the spring?

If so please come along to our planting morning during half term on Thursday 30 October 10am-12 noon. The event is free and all tools will be provided. It will also be an opportunity to look round our new visitor centre at Ridley’s Court where refreshments will be served. It’s suitable for all ages, but children must be accompanied by an adult.

Please note that booking is essential! 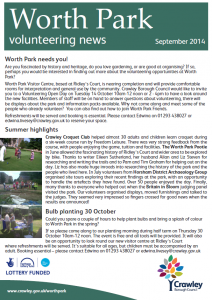 New flight paths across large parts of Kent, East and West Sussex and Surrey are causing a wave of protest. You may like to see the attached press release. 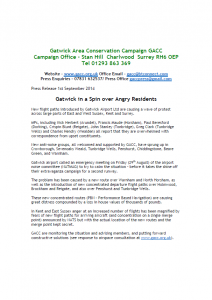 The decision by the Airports Commission to rule out Boris Island brings into sharper focus the threat of a new runway at Gatwick. GACC’s reaction is that there is no need for any new runway anywhere, not in the Thames estuary, not at Heathrow and definitely not at Gatwick.

Why? Because the official forecasts show that Stansted and Luton will not be full until well into the 2040s. There is no economic or environmental sense in building a new runway while existing airport capacity is underused. After 2040 it may well be found that the use of larger aircraft make any new runway unnecessary.

Join us at a meeting to protest about the new flight paths and to express opposition to a new Gatwick runway
on Saturday, 22 November (afternoon).

Details will be circulated later.

The more people who come, the stronger
our protest will be.

Please let GACC know if you are willing to act as a steward at the meeting.