Worth Park is currently 2 years into the 5 year restoration programme and Crawley Borough Council would be very interested to know your views about it.

If you have time we would be very grateful if you could complete their short on-line survey by following this link. It should take no longer than 2 minutes to fill in.

Thank you for your time, which will help us deliver the best possible service to you all.

Please see below the new timetables (effective from Sept 6) for buses 40 & 50. 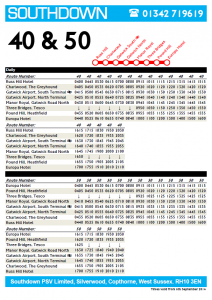 It is for the airport, for shopping trips, for getting to work…………. for everyone.

We also provide a free text messaging service (see below), once registered passengers will be instantly informed of any unexpected service alterations. 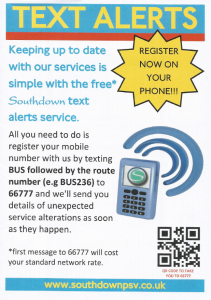 Our low floor buses provide easy access for wheelchair users, passengers with baby buggies or shopping trolleys and the less mobile. Like all Southdown services the buses used will be clean and tidy and driven by smart, helpful drivers.

If you require any printed timetables please contact us.

Secret plans to influence decision makers over a second runway it Gatwick Airport have been made public after a dossier was left on a train.

The document, which has been seen by the Crawley Observer after extracts were published in the Sunday Times, sheds light on the campaign to convince the airport commission to select Gatwick as the preferred option for expansion when it makes a recommendation to, central Government in 2015.

The independent body, led by Sir Howard Davies, shortlisted a second runway at Gatwick and a third runway at Heathrow as two of the options to increase runway capacity in the South East back in December.

The dossier argues that a ‘systematic approach’ is needed to target around 100 key individuals who have significant influence with the Commission and ‘convert them to our side, or at least to neutralise the prevailing default bias that we perceive exists in favour of Heathrow’.

This follows ‘useful engagement’ with Number 10, the Shadow Chancellor, Liberal Democrats and a number of other important officials.

It also expressed the need to win over those advising the opinion leaders, press, local communities, and businesses large and small.

Proposed actions listed include seeking opportunities to meet key influencers, developing press interest around its consultation report, moving forward an idea of a coalition of South London boroughs against Heathrow, and a mailshot when Parliament returns in September.

A spokesperson for the airport said: “Gatwick’s impact on the local community – even with a second runway – would be equivalent to less than five per cent of the people Heathrow impacts today.

“Given the fundamental importance of the issue to the decision we are undertaking our own research which is ongoing. This is the first time that Gatwick has ever been able to forcefully put its case
forward for expansion.

“It wouldn’t surprise anyone to know therefore that we would want as many people as possible to understand the merits of our case. We are playing catch up with Heathrow’s decades of lobbying for a third runway.”

But Sally Pavey, a leading campaigner against a second runway, said the document ‘shows the lengths Gatwick will go to influence those people who we have elected to represent us’. 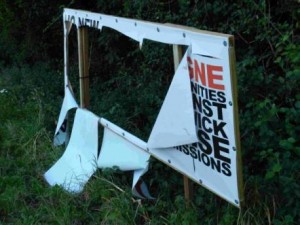 Members of a group opposed to expansion at Gatwick airport called the police after two banners placed outside their homes were vandalised. the damage happened sometime before 6pm on Sunday (august 10th) outside properties along the A24.

New flight paths introduced during the past year are causing a wave of protest across East and West Sussex, Kent and Surrey. Support for GACC (the environmental group covering the whole area around Gatwick) is growing rapidly. Five new local anti-noise groups, linked to GACC, have been formed in recent months.

Public meetings with several hundred angry people have been held as far afield as Penshurst near Tunbridge Wells, Crowborough in East Sussex, and Warnham near Horsham.

GACC is demanding that the all the new routes should be scrapped. Brendon Sewill, GACC chairman, said: ‘There is no urgent need for these new flight paths, and it makes no sense to introduce them now before a decision is taken whether or not there is to be a new runway.’

Where flight paths are concentrated on a single narrow line (as a result of aircraft now using satellite navigation, like Satnavs in cars), GACC is calling for compensation to be given to people whose houses are devalued.

According to Sewill: ‘The law says that, when a new motorway is built, people with houses nearby must receive fair compensation. The same should apply to new motorways in the sky.’ 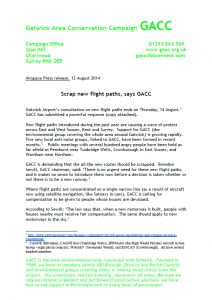 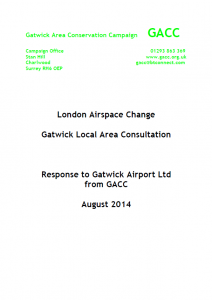 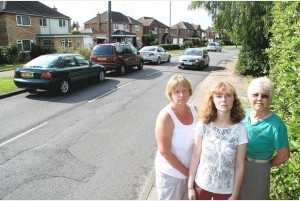 Residents in Pound Hill have been left perplexed at proposals to put parking restrictions down just one side of their road.

West Sussex County Council is planning to extend double-yellow lines currently on Grattons Drive for a further 50 metres to the north of its junction with Milton Mount Avenue.

Then single yellows are planned to take over from where the double-yellows stop, restricting parking during the week.

But both of these proposals apply just to the western side of Grattons Drive.

The idea behind the double yellows is to “improve visibility for all road users”.

It is hoped the single yellows, which will prohibit parking from 10 to 11am and from 2 to 3pm, Monday to Friday, will stop commuters leaving their cars on Grattons Drive and walking to Three Bridges station.

But Julia Tyas, who lives on Grattons Drive, feels that the proposals – which until August 6 are subject to a public consultation are “crackers”.

The 54-year-old said: “My husband and I and my neighbours feel that all they’re doing by putting the lines down one side of Grattons Drive is encouraging people to park on the other side of the road. So they are not getting rid of the problem – they are just moving it from one side of the road to the other.”

Mrs Tyas’ husband David, 57, has made the couple’s feelings known by responding to the county council’s consultation.

One of the couple’s neighbours, Brenda Taylor has also blasted the plans.

She said: “We think it’s very shortsighted of them. It’s going to put the traffic on the other side of the road and on a blind bend.”

Mrs Tyas agrees that something needs to be done.

She explained: “There’s a bend in the road and when people are parking on the western side the traffic coming from Worth Park Avenue can’t see round the parked cars.

“Coming from either direction you can’t see round the corner and you can potentially meet an HGV coming from Tesco Express at Peterhouse Parade.

“It encourages people to go fast to get through where the parked cars are.

‘And with the (nearby) schools you get all the parents walking their little children down Grattons Drive, and cars do mount the pavement. It’s dangerous.”

Mrs Tyas believes the current plan is “ridiculous”. She added: “The proposals are completely and utterly stupid. Whoever came up with them needs their brain tested.

‘All it will do is push the problem from one side to the road to the other. Itrs crackers.

“It’s a complete waste of time and taxpayers’ money” Mrs Taylor added: “They say the parked cars will slow traffic down but they won’t – they just make people speed up.

‘And it’s a very busy road. We have large lorries using it, and they go on the pavement.”

Gatwick Airport has announced £256 million of funding for jobs, housing and apprenticeships if a second runway is given the go-ahead.

The airport has said the plans are in response to some of the issues raised during the public consultations held earlier this year.

The money includes £46 million for infrastructure that would be required around the 9,900 new homes the airport says would be needed.

An extra S5 million would be put into noise insulation measures.

Other promised schemes include £10 million for road improvements and a £3.75 million plan to create 2,500 apprenticeships.

More than half of the total, £131 million, would be to fund compulsory purchases of houses, with owners set to be offered more than 25 per cent above market value.

Gatwick Airport CEO Stewart Wingate said: “We are determined to be a good neighbour and not lose sight of the concerns of those communities close to home.

“We’ve listened to local people and have created a wider range of pledges to deliver improvements in many of the areas that matter to them most, from new jobs and housing, to business support and noise mitigation.”

The Gatwick Area Conservation Campaign has called for more compensation to be given to households in and around Crawley.

A spokesman said: “If Gatwick has suddenly found itself so flush with funds, why are they not offering proper compensation to all those tens of thousands that will suffer the devaluing of homes and quality of life?”

Get the Full Story

Notice is hereby given that the Sixteenth Annual General Meeting of PH(N)RA will be held on Tuesday 9th September 2014, in the East Hall, Hazelwick School, commencing at 7.30pm

We look forward to seeing you on the 9th September.

Please note: – the Annual General Meeting is for Members Only,
non-members will be required to join if they wish to attend.