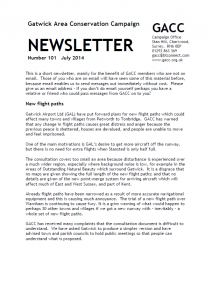 Worth Park Volunteering News
31st May 2014 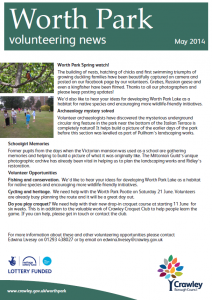 For more information about these and other volunteering opportunities please contact

There will also be a presentation on Phase 2 of the West Sussex Fire and Rescue Design. 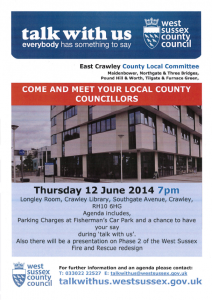 Gatwick Airport has argued it is in a better position than Heathrow for expansion because it will be “road and rail ready” for a second runway by 2021.

Airport bosses unveiled proposed public transport improvements this week, with pledges that there will be a train to central London every two-and-a-half minutes by 2019.

Also promised were quicker journey times to the West End and City than Heathrow, and 1,000 railway stations accessible within one change.

Hugh Sumner, senior transport advisor for the airport, said: “Gatwick will be road and rail ready for a second runway by 2021 with no additional cost to the taxpayer.

“The ease at which these improvements can be delivered adds yet more weight to the obvious case for a new runway.

“We want 60 per cent of our customers to use public transport, comparable with the best globally and better than any UK airport.”

Gatwick Airport railway station currently has 13 million passengers a year for airport purposes and one million who use it for commuting.

Airport bosses have said that not only will the public transport improvements place no additional burden on the taxpayer, but customers would actually generate £3 billion in rail ticket sales each year.

Airport passengers using the rail network would also help to fill trains in both directions off peak and in the opposite direction to commuters during peak periods.

Improved road links to the airport are also planned, with upgrades to the M23 approved to make it four lanes wide.

The airport has pledged to double capacity for vehicles at the junction 9 turn-off.

The A23 and Balcombe Road will also be diverted if the airport boundaries change due to expansion, to help prevent them becoming rat runs.

Gatwick Airport has submitted a 3,200 page report on why it should be chosen for expansion, to the Airports Commission.

The report, submitted today (May 14), has outlined arguments for a second runway at Gatwick being a better choice for expansion, than a third runway at Heathrow.

Stewart Wingate, CEO at Gatwick, said: “Why would you choose to fly a quarter of a million more planes every year over one of the world’s most densely populated cities when instead you can fly them mostly over fields? Why tunnel part of the busiest motorway in Europe – M25 – causing serious traffic disruption, when you can build on land already set aside for expansion? The choice is an obvious one.”

A spokesperson for West Sussex County Council has said the council supports in principle the expansion of Gatwick and it will meet with Gatwick’s management to discuss residents’ concerns “as
soon as possible”.

Brendon Sewill, chairman of GACC (Gatwick Area Conservation Campaign), said: “We will be studying the plans carefully when they’re published but at the moment this looks like a lot of advertising hype matched by similar advertising hype by Heathrow.’

An image showing how the proposed runway would look