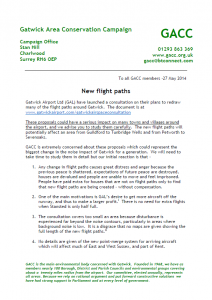 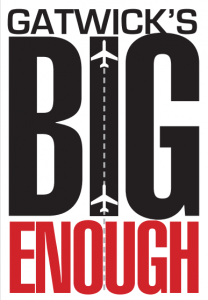 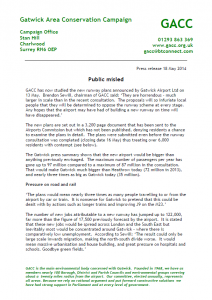 The 2nd Gatwick Runway Consultation has finally brought out some honesty from Gatwick Airport Ltd (GAL) and the Gatwick Diamond Group.

At the Consultation Exhibitions the GAL experts would/could not provide any proposals as to limiting and safeguarding against airborne pollution, they could only say it will be monitored and that currently most areas around Gatwick come within “legal UK limits”. However, pollution will not just come from aircraft but also from increased and concentrated road traffic which would mean that at times some locations may already fail the more stringent EU limits.

The GAL experts stated that GAL will only be responsible for the infrastructure “within the airport boundary”, potentially including the rerouting of the A23 and Balcombe Road and the M23 Junction 9, with everything else the responsibility of local and central government. They offered the already planned removal of the hard shoulder on the M23 and longer trains as major projects that will solve the traffic issues.

The GAL noise contour maps only show Average Noise Levels which infers that only the neighbourhoods adjacent to and at each end of the airport runways will be deemed as being moderately inconvenienced, however, the experts conceded that much of Crawley and surrounding areas will at times be subjected to more excessive noise levels.

The GAL experts would not be specific as to any real benefits for the Crawley residents. The consistent response was that “businesses and the unemployed in the South East and the wider UK would greatly benefit from new jobs and business opportunities”. This response has been echoed by both GAL and Gatwick Diamond executives in the past month in either the press and/or at a meeting with Crawley Councillors.

The GAL experts, and also the Gatwick Diamond executives in the press, questioned the claim that up to 45,000 houses will be potentially be required to accommodate a future incoming migrant workforce. They had to be reminded that this 45,000 was a key point within a report commissioned jointly by W.S.C.C and Gatwick Diamond.

The “wide spaced” runway options show that additional land will be required to that currently “safeguarded for airport expansion”.

This Consultation shows that whilst the South East and the wider UK will benefit from new economic and employment opportunities, Crawley and the area around Gatwick will bear the cost by having the environment, that has brought many people to the area, destroyed.

The Government’s official consultation on the final proposals is due in the autumn, so again we should all ask ourselves, “although there may be employment, will our children and grand children really want to live in such a polluted, urbanised and congested environment?

The easiest way to say No, is to click on the following link : –

gatwickrunwayconsultation@ipsos.com simply substitute the NAME and ADDRESS in the auto-generated email and press the send button.

Note: One’s Enough is a voluntary non political group of “cross party” councillors and members of the public, supporting a One Runway Two Terminal Airport with spare capacity.

PH(N)RA would like to remind you that if you have not done so already, you need to respond to the Gatwick Airport runway consultation before 16th May. You will find details at

The online form is long-winded and some of the questions are deliberately crafted, in answering some of these questions the response could be interpreted as a yes to a further undisclosed runway option. Therefore, if you wish to object to the runway expansion outright, please send an email to this effect before the 16th.

The easiest way to say No, is to click on the following link : –

gatwickrunwayconsultation@ipsos.com simply substitute the NAME and ADDRESS in the auto-generated email and press the send button. 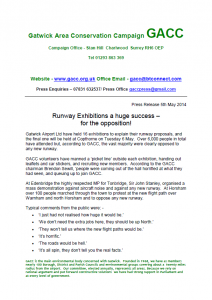