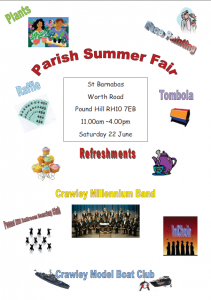 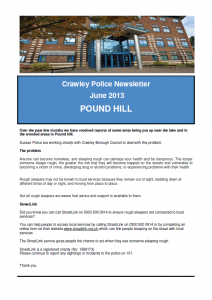 WORK is about to get under way on building roads and facilities for a new Crawley neighbourhood.

The “North-East Sector”, north of Pound’ Hill, will comprise of 1,900 homes, shops and a primary school when it is eventually finished. And it has been revealed this week that infrastructure work will start in the summer.

This will involve building new access routes, with junctions off Steers Lane to the north and Crawley Avenue to the south.

Work will also begin on the neighbourhood centre Developers Taylor Wimpey and Persimmon have secured detailed planning approval to construct the infrastructure for the first phase of the development.

Tree clearance work has already been undertaken for the Steers Lane access point, to avoid the bird nesting season.

In the first phase of construction 290 homes will be’ built , 40 per cent of which will be “affordable homes”.

The first residents will have a health centre, primary school, shops and community buildings ready to welcome them.

Claire Denman, Crawley Borough Council’s cabinet member for planning and economic development, believes it is vital to get the facilities built as early as possible.

She said: ‘A major condition of the original outline planning permission was that the neighbourhood would be provided for and self-sufficient.

“These key bits of social infrastructure being in place will be important.”

“Many years ago I remember moving to a new housing estate myself and there was nothing there at all.”

“It felt incredibly isolated and there is absolutely nothing worse than that when you move into a new home.”

Crawley’s 14th neighbourhood, which hasn’t yet been given an official name, will be bordered by Crawley Avenue to the south, Balcombe Road to the east, Steers Lane to the north and the railway line to the west.

More than two thirds of the site will remain as’woodland, while playing fields, a children’s play area and large areas of public open space will be created.

Part of the open space will be picturesque parkland, with Gatwick Stream running through it and footbridges installed.

Cllr Denman added: “Plans for this new neighbourhood have taken a long time to get to this stage so I’m delighted that work, is soon to start.

“Crawley desperately needs more housing and the infrastructure that goes with a new neighbourhood so this is great news for the town.”

The development was first mooted back in 1998.

But it was not until February 2011 that it was given the go ahead after secretary’ of state for communities Eric Pickles granted outline planning permission.

Detailed plans for the first phase of homes are being finalised and it is anticipated construction of the first homes will commence next year, with residents moving in before the end of 2014.

Moving In: An artist impression of how some of the homes in the development should look