A species of tree which was around when dinosaurs ruled the world will be planted in the grounds of Worth Park to honour the Queen’s Diamond Jubilee.

Members of Pound Hill North Residents’ Association will plant a monkey puzzle tree which could grow to anything between six and 25 metres, on Wednesday (December 5).

The group worked closely with the council’s parks department on the selection of the tree and the Mayor, Cllr Keith Blake, has been invited to perform the honour of laying a commemorative plaque underneath it.

Association chairman Alan Quine said: “We wanted to mark this very special occasion and were looking for a mature and distinctive tree to dedicate.

“The team suggested this was typical in Victorian parks and would have formed part of the original design.”

The selected tree is 15 years old and already stands at more than three metres tall. The monkey puzzle tree (Araucaria Araucana), or Chile pine, originates from South America and was alive zoo million years ago. It became popular in Britain during the 1850s. Its name derived from an early owner who was showing it to some guests, and remarked ‘it would puzzle even a monkey to climb that’.

Cllr Lenny Walker, Cabinet member for leisure and culture said: “l d like to thank Pound Hill North Residents’ Association for their kind dedication. “The tree will be a valuable addition to the park for all to enjoy.” 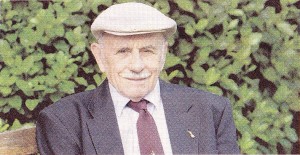 DETAILS about Crawley’s newest neighbourhood have been on display.

Construction of the yet-to-be-named development of 1,900 homes north of Pound Hill, which has been referred to as the North East Sector, is set to start next year.

Developers have since said a detailed planning application for the first phase of homes will be submitted by spring 2013. Outline planning permission was granted in February 2011.

In the first phase of construction 290 homes will be built, of which 40 per cent will be affordable housing. It is expected the first residents will move in by the end of next year.

Residents in the town’s 14th neighbourhood will also have a new health centre, primary school, shops and a community building on their doorstep.

Picturesque parkland will be created, with the Gatwick Stream running through it and footbridges installed for access.

New roads will be constructed before building starts, with junctions off Steers Lane to the north, and Crawley Avenue to the south.

Ken Glendinning, from the Homes and Communities Agency, which is working in partnership with the borough council and developers to deliver the scheme, said: ‘As well as contributing to the town’s economic growth, this neighbourhood will include new high-quality homes and community facilities.”

Although new roads will be built, residents will be encouraged to walk and cycle around the neighbourhood with the construction of an extensive network of footpaths, bridges and cycle routes.

The developers say they have taken into account concerns over how a new neighbourhood will affect the surrounding environment.

A spokesman for Taylor Wimpey said: “Important areas of the existing woodland are to be retained with minimal loss to important trees within the new neighbourhood.

“The proposal will also provide for new landscaping, mitigation planting and management of eristing and proposed landscaped areas.”

A worry over how animal species currently living on the land will be preserved has also been raised. Developers have pledged to create new habitats for protected species.

The potential need to relocate dormice, reptiles and bats is under consideration.

Being located near Gatwick Airport, the M23, railway lines and Manor Royal means noise issues will need to be dealt with.

New and improved building fabric will be used in the building process alongside fencing to protect housing areas. Landscaped buffer zones alongside the railway and motorway will be put in place.

A potential flood risk has been highlighted due to the Gatwick Stream and no houses will be built within the floodplain.

Artist’s Impression: illustrations of what homes to be built in the North East Sector housing development could look like and, right, the master plan for the development which will be to the north of Pound Hill 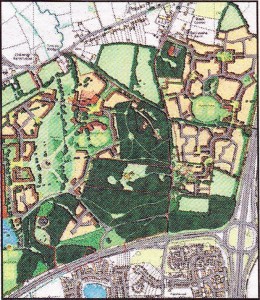 Among the volunteers dodging between felled trees and wood-chipping machinery was Pamela Graham, 72, of Orde Close, Pound Hill.

The grandmother-of-four and Friends of Worth Park member, said: “It was getting so overgrown. I’m delighted work has started – without the. Lottery funding everything would have just crumbled and it would have turned into an old graveyard.

“We saw photographs – an aerial shot – and we know what the area was like before its mansion was demolished. We’re hoping to return it to those days.”

Mrs Graham added that she had little time for residents living in Ridley’s Court who have complained about changes to the park.

The building, which at one time was the park’s stables, has been converted into flats and residents living in them fear an invasion of privacy, through part of the building being turned into a visitor centre and toilets.

Unimpressed by their gripes, Mrs Graham said: “If you live in a listed building, you should want the history to be carried on. If you’ve a piece of history on your doorstep, you should share it.”

To receive £2.4 million of Lottery funding, Crawley Borough Council had to commit £975,000 of its own money to the project as well.

In the initial work trees were chopped down which would not have been in the park during Victorian times, while a general tidy is taking place, with overgrown shrubs being cut back.

Once the project has been completed the park’s fountain will be working again and its stone steps and rockery will have been repaired.

Lenny Walker, the council’s cabinet member for leisure and culture, was thrilled to see work starting. He said: “People think of Crawley as a new town with the same old buildings but when you have little gems such as this hidden away, you need to let People know they are here.

“Crawley has a history I moved to Crawley some 17 years ago and it took me a while to discover pockets such as this and Tilgate Park.

“The vast majority of this is down to the volunteers. Obviously we have technical expertise in the council, but the most pleasing part of this is the residents have driven this.”

Councillor Walker hopes those residents concerned about the changes will come to welcome them.

He said: “I can understand the concerns. Change is sometimes uncomfortable. I have to say (though) if I were a resident here I would be looking out on to what is effectively my back or front garden and thinking wow – where else would I find a property with this?”

The work is expected to take around 18 months to complete.

Tree-Mendous: The tidy up and restoration of Worth Park has begun 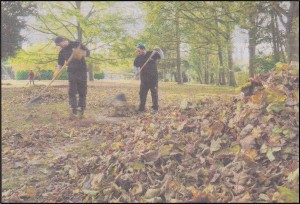 The first residents of a new neighbourhood north of Pound Hill could be moved in by the end of next year.

Construction on the yet-to-be-named development, which has been referred to as the North East Sector, will start next year. It will eventually include up to 1,900 homes, a primary school, a community centre, office and industrial space, retail space and parkland.

Two exhibitions are being held next week for anyone interested in finding out more. The first will be on Tuesday from 5pm to 8pm at Milton Mount Community Centre, in Pound Hill. The second will be on the following Saturday from 10am to 4pm in County Mall.

Claire Denman, Crawley Borough Councils cabinet member for planning and economic development, said: “This is the perfect opportunity for everyone who is interested in this development and the growth of the town to find out more and also get their questions answered directly by the developers.

“This new neighbourhood took a decade to come forward and, now it has, it’s a vital part of the solution to Crawley’s growing housing need.” The development is expected to take about 12 years to complete, with construction in four phases.

The first will include infrastructure and facilities like the primary school, shops and community centre. Detailed planning discussions are taking place.

The News told last month how development had just started on another new neighbourhood, Kilnwood Vale, to the west of Bewbush.

Mapping the future: The master-plan for the north East Sector development 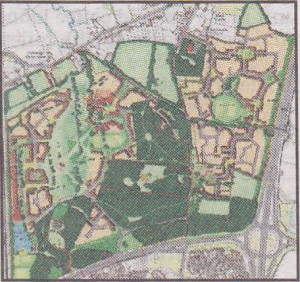