A POUND HILL resident says parking is still a ‘nightmare’ on Worth Park Avenue and wants the council to step up proposals to tackle the issue.

In March, the Observer reported how dozens of commuters returned to their cars to find yellow advisory notices (pictured) from Sussex Police placed on their windscreens in a bid to deter people from parking near a bus stop.

Drivers travelling up Worth Park Avenue from the roundabout find it difficult to see past the parked cars and have to venture the other side of the road to squeeze past them into the path of oncoming traffic, which residents say is dangerous.

West Sussex County Council announced it was unveiling proposals for double yellow lines on the stretch of road and a controlled parking zone covering several roads in Pound Hill.

The scheme was discussed and agreed by the East Crawley County Local Committee on May 23 but, almost a month after the meeting, resident Barbara Talman, 79, from Pound Hill, said nothing has been done.

She said: “The other day I went up there and counted 30 cars parked on that little stretch of the road.

“I have had two near misses driving up there and it is so dangerous having to pull out on to the side of oncoming traffic. You cannot see past the cars and if a bus or lorry is coming the other way you’ve had it.

“I don’t understand why the council are not doing anything about it. I have spoken to the police and they say it is the council’s responsibility and yet they do nothing. Are they waiting for a fatal accident to happen?

“It is getting worse and worse. There is a bus stop there and now cars are even parking in that. That is illegal parking. “I think the council needs to act before an accident happens.”

A spokesman for the county council said it was aiming to start work in October. The spokesman added: “Work will start as soon as possible but it will take some time. It is not just a case of marking on a plan where to put a sign and then ordering it.

“We are aiming for October at the earliest for something could happen. We cannot rush through lines before this date as it would be unenforceable.

“In the meantime there is nothing we can do apart from liaising with Sussex Police to take action against any dangerously parked vehicles.” 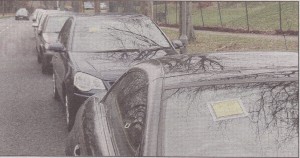