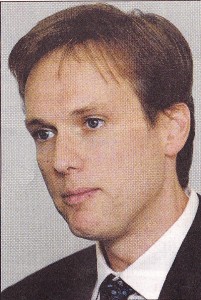 A lottery grant of £2.4 million has been offered to Crawley Borough Council for the restoration of Worth Park Gardens. Two opposing councillors give their views on why the money should or should not be accepted by the council

Roll back the clock 100 years and one of the most fashionable, spectacular gardens was in its prime. It featured in the front pages of the leading magazines of the day and was a source of employment and pride for many residents.

Fast forward to 2004 … The garden had just been subjected to another spate of vandalism. However, this time enough was enough. Residents from all Crawley and as far away as Australia, began to show a real interest in the garden.

English Heritage and the Department of Culture, Media and Sport assessed the gardens, granting the old stable block and the main garden features grade two listed status — the same level of protection as many listed buildings on the High Street.

They declared that the garden was of national importance and said that the fountain, although designed by the same landscape architect, was a better example than that in Buckingham Palace.

This view is now endorsed by the Heritage Lottery Fund Committee, which considered the preservation and restoration of the park to be so important that it offered a grant of £2.4 million to fund the project.

Since 2006, the council has been working with residents and groups interested in Worth Park, trying to find a way of restoring the gardens.

The gardens have had little or no repairs compared with other green spaces in the town, such as Tilgate Park and Goffs Park, which have enjoyed, and will continue to receive, new investment.

The situation now is that the council is obliged to carry out repairs to make the lake, steps and paths safe. The cost to the council will be the same regardless of whether we accept the £2.4 million or not.

The two choices are; turn down the offer of funding, spend our own money and do the bare or accept the lottery funding, take seriously our responsibility as custodians of a nationally important park, which we are proud to have in our town, and restore it to its former glory at the same time creating apprenticeship and training opportunities.

The simple facts are, we cannot ignore the park and the lottery funding has been offered specifically for Worth Park and cannot be spent elsewhere. Surely nobody with any common sense and pride in Crawley would say “No thanks”, when offered £2.4 million to improve their town.

Crawley Labour councillors make no apologies for having challenged the Conservatives’ decision to spend more than £1 million on Worth Park.

This was the wrong time to go ahead with this, particularly when the Tories are pressing ahead with privatising Tilgate Park “to save money” (less money incidentally than they’re spending on Worth Park).

Tilgate Park is the jewel in Crawley’s crown. Worth Park, given its remoteness, will never approach Tilgate Park’s importance or popularity Yet, to improve a minor park, the Tories are ready to begin an unpopular and unnecessary privatisation of Tilgate Park. This is unfair and wrong.

The Tories arrogantly pretend these people don’t exist, even when the public gallery is packed full of people telling them they’re wrong. They’re massively out of touch.

We’ve spoken to scores of residents across Crawley. Almost 100 per cent of them told us that the Worth Park project is a poor use of money I say put that money into Tilgate Park instead. The Conservatives have pursued a divisive policy on leisure and parks for two years.

They could not have been less inclusive if they’d tried. Labour councillors not only opposed the money set aside for the Worth Park lottery bid at the time, but the costs to the council then were meant to be much less. Now they’ve leapt beyond a million. The lottery money is almost irrelevant if Crawley taxpayers have to fork out huge amounts to receive it.

Thanks to our actions, the decision has been suspended until the council meets at the end of February. We have no doubts it was the right thing to do. 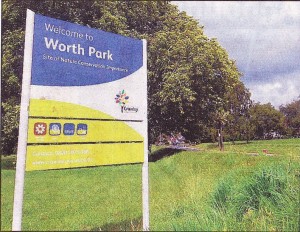 OPPOSITION councillors have questioned whether Crawley Borough Council should accept a £2.42 million lottery grant towards improving Worth Park.

To receive the funding the council has to commit to spending £975,000 of its own money on the project.

At a Crawley Borough Council cabinet meeting last Wednesday Labour councillors expressed distaste at spending such a sum at a time when the council is considering outsourcing the management of parts of Tilgate Park to save £750,000.

Ruling Conservative councillors hit back, claiming the council would be mad to turn down such a huge sum of money.

The authority found out its bid for money from the Heritage Lottery Fund and Big Lottery Fund had been successful last month.

The money would allow the council to employ a head gardener and a gardening apprentice, while restoring the park in Pound Hill to its Victorian glory and paying for its maintenance for five years.

But Labour’s Ian Irvine asked if a head gardener was needed given the park’s small size.

And colleague Michael Jones questioned the sense in spending money at Worth Park while saving money at Tilgate Park.

He said: “The decision comes at the same time as the cabinet is taking steps to commercialise the borough’s main park, Tilgate Park, in order to save money.

“If you were to ask most resident of Crawley what would they rather have, Worth Park being done up or to stop the privatisation of Tilgate Park, I think the vast majority of them would tell us Tilgate Park is the winner by a country mile.”

Mrs Blake said: “All the parks in the town are different types and they are all used by different people for different functions. “Work needs to be done or we’ll lose Worth Park altogether. Not to take the £2.42 million would be to look a gift horse in the mouth.”

Mr Barrett claimed the Labour councillors were confusing what they wanted with what the town’s residents wanted and Mr Crow called Mr Jones’ comments appalling.

The Labour councillors “called in” the Tories’ decision to accept the grant, which means it, will be debated at the next full council meeting at the end of February.

This looked to have put the whole scheme in jeopardy as the call in means the council will not meet a 20-day deadline to accept the money. But yesterday (Tuesday) the Heritage Lottery Fund granted the council an extension until after the council meeting. 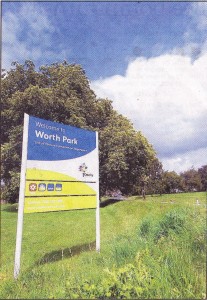