Fancy a bit of fresh air and exercise?

We are looking for volunteers for the annual Milton Mount School litter clearing on Saturday, 12th November, between 10 am and 1 pm. The necessary equipment will be provided but please wear suitable clothes and gloves.

PROPOSALS for a new controlled parking zone (CPZ) in Pound Hill have Just been unveiled.

The plan has been drawn up by West Sussex County Council in response to complaints about congestion and access difficulties.

An informal consultation was held earlier this year to “test the water” and decide whether it was worth coming up with detailed plans.

Following the consultation the plans are to introduce the CPZ into eight roads in Pound Hill.

The proposed CPZ would operate from Monday to Friday between 9am and 5pm.

During these hours parking would only be permitted in designated parking bays.

Residents’ permits would be available for these spaces at a probable cost of £40 a year for the first permit and £80 for a second.

Disabled drivers who live within the zone would be able to apply for a free first permit.

Visitor parking would be accommodated by purchasing visitor permits, available in books of ten.

The county council is now asking for feedback on the plans, with a deadline for comments set for November 25th.

Drop-in sessions, where residents can discuss the proposals with council officers, are taking place this week.

PLEASE note this article reproduced from Crawley News and the opportunity to go to the drop in sessions has now passed.

Talk with us – Meet your local county councillors

Agenda includes an update on Infrastructure Planning, a decision on Community Initiative Funding and a chance to have your say during ‘talk with us’. 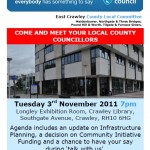