Residents have spoken of their fury after ‘historic’ trees were felled in a Crawley road.

People living in Radford Road woke on Saturday, February 11, to find workmen ripping up trees on land behind the Parsons Pig pub.

Rita Fletcher, who lives in the road with her mother Mireya, believed the trees were 300 – 400 years old. She said: “It’s an absolute disaster. The neighbours are really cross. “My mother who is 96 years old is absolutely distraught about the whole thing. “It has completely transformed the view from our lounge window.” 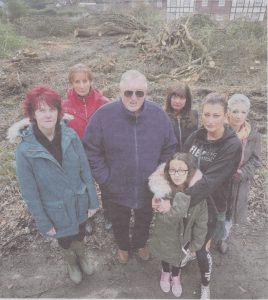 Residents protest against the tree felling

Neighbour Jacquie Colad agreed” She said: “It is just unbelievable. They have just lifted the whole lot and it looks like a bomb has gone off.”

Chris Jenkins has lived in the area for more than 14 years. He said: “It is totally outrageous. It’s destroyed the visual amenity at the front of our house.”

Crawley MP Henry Smith was concerned by the felling and asked Crawley Borough Council to look into the matter.

A council spokesman said none of the trees had protection orders.

The trees have been removed by Febo Designs as it looks to extend the pub. Alfredo Fornieles, of Febo Designs, said: The purpose of the clearance is to enhance and to provide a safe amenity space for members of the public enjoying the facilities of the pub.

“I believe six mature trees were felled. One ash, four oaks and a yew tree. The rest of the clearance relates to understory shrubs and vegetation.

“According to our arboriculturalist none of the felled trees were 400 years old. The yew tree, adjacent to the north side of the hotel building, had a live crown but also had extreme hardwood decay and hollowing which meant that the tree condition presented a foreseeable risk of failure.”

He added a planning application would be submitted for the extension and include a new tree planting scheme.